By Sara Albanna and Cheasty Anderson 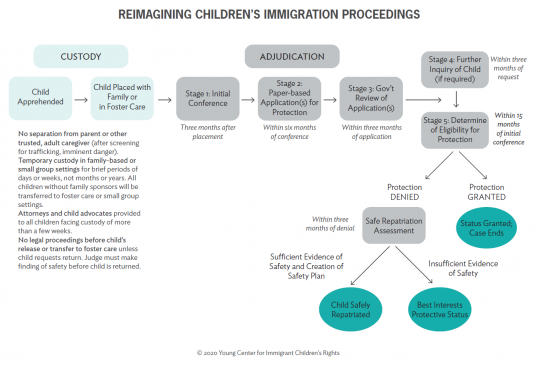 Immigrant advocates have been lobbying for changes in immigration policies that will protect families, reduce trauma, and uphold human rights for all. This will require innovation and well thought-out systemic changes. As such, and especially in the transitioning political context, we are inspired by the work of organizations that are exploring, researching, analyzing, and developing new immigration frameworks that can help us move towards this direction. One of these organizations is the Young Center for Immigrant Children’s Rights, which was founded in 2004 in Chicago and works with social workers, attorneys, and volunteers to advocate for the best interests of unaccompanied immigrant children through the immigration process. We would like to uplift their work and draw attention to their recently-released report, Reimagining Children’s Immigration Proceedings: A Roadmap for an Entirely New System Centered around Children.

With the help of experts in immigration, international migration, child welfare, juvenile justice, and child development, this report produces specific recommendations to create an immigration system that is built around the best interests of immigrant children, especially unaccompanied and separated children. This is creative, collaborative, and visionary work that we need if we are to achieve meaningful reform to the current system, which terrorizes, traumatizes, and abuses the children with whom it interacts.

Our current immigration system is badly broken, and children bear the full weight of that dysfunction. When a child arrives in the US alone or is separated from their family, they are considered unaccompanied and are passed through detention centers operated by Customs and Border Protection (CBP) and then the Office of Refugee Resettlement (ORR) before they are supposed to be released to a sponsor or foster family. This process is severely backlogged, so children are being detained much longer than they are supposed to. The problems of family separation and detention are well-documented, and include unsanitary and unsafe conditions, medical and physical neglect, verbal abuse, and sexual abuse and harrassment. The legal system itself is rife with structural challenges to allowing children a fair process. Since March 2020, children have been deported summarily without due process and sometimes to countries that are not their country of origin. Their only protections are the limited assurances embedded in the Flores Settlement Agreement of 1997, which are insufficient even when followed faithfully but are frequently flouted. These problems, among others, are endemic. The result is a system that disadvantages child migrants, exposes them to danger, further traumatizes them, and leaves them without protection.

The Young Center’s proposals are not an attempt to fix the current immigration system. Instead, they propose a whole new system that will be more efficient, and more importantly, center and prioritize the rights and needs of children. In order to make this radical change, the Young Center has framed their vision using key guiding principles including primary consideration of a child’s best interests throughout the entire immigration process; safety first; avoiding family separation; fairness; and shared rights and protections for all children. With these in consideration, the Young Center recommends that the new system will:

While our current system diminishes children’s rights, re-traumatizes them, and disregards what is clinically best, this child-focused immigration system that the Young Center has imagined places children at the center, and supports them. Our hope is that politicians and policy-makers will invest serious energy and political capital in making the Young Center’s vision a reality. At this moment when many are hoping that a change of administration will let us “return to normal,” this is a powerful reminder that “normal” isn’t good enough. Our immigration system needs deep structural change; we must fight for an immigration system that respects and ensures the dignity, respect, and care that all children deserve.