As of October 30th, US Election Project reports that over 85 million voters have already cast their ballots, shattering the 2016 election cycle’s early voting total. Young voters have been leading the way, with 7 million voters under the age of 30 casting a ballot in-person or absentee so far, according to CIRCLE.

Despite being named the most difficult state in which to vote, Texas has thus far led the nation in voter turnout, with a record-breaking 9 million Texans — and over 1 million Texans below the age of 30 — voting by the end of the early voting period. The Texas Tribune is tracking Texas turnout numbers statewide and by county.

Government and civics teachers around the country “are feeling way more vulnerable and way more under attack this election season than ever before,” says the chief education officer for iCivics. As bipartisan support for civic education rises, CDF-Texas invites educators to use the Setember 2020 #DIYDemocracy guide to help plan lessons and encourage civic participation.

The School of Civic and Economic Thought and Leadership at Arizona State University has released an app designed to bring “comprehensive civic education resources” to the hands of young people on campus and beyond. The app, named CivEd, is available for free on the Apple and Google Play stores. The app includes study guides, flashcards, and a virtual guide to the Civic Classics Collection. 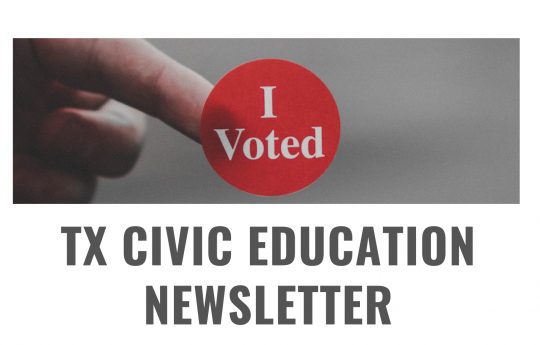 Tomorrow, November 3rd, is Election Day – the last day that registered voters can cast their ballots. As local election officials across the country do their jobs to ensure that every eligible vote is counted accurately in the days and weeks following, CDF-Texas reminds you to share verified and accurate information with your networks. Read on for more resources and stories of young people leading their communities.

California – In cities including Berkeley, Oakland, and Culver City, young people are pushing their local and state governments to lower the voting age. Valentine Barrett of Oakland is one of many youth activists who argue that 16- and 17-year-olds should be able to vote in primaries and local elections, commenting that, “Providing a taste of civic engagement to teens before they have access to larger elections…would give them a hands-on lesson on the voting process.”

United States – Youth across the country heard the call for younger poll workers this election cycle, and stepped up to the plate. Vogue has profiled eight young women who are first-time poll workers to hear what motivated them to sign up – from college courses to organizing work to wanting to protect older poll workers from COVID-19.

Guilin, China – The conversation surrounding youth climate activism often highlights white, Western activists at the expense of organizers of color around the world. In Guilin, China, Howey Ou is leading school strikes for climate. Inspired by Greta Thunnberg, the 17-year-old has been organizing for two years to demand that the Chinese government prioritize the climate.